PHOENIX — Some call them humble vegetables, while others think of it as “rabbit food.” And yet, lettuce and other greens bring in about $2 billion to Arizona each year, according to a new report from

the University of Arizona.

“Arizona ranked second in the nation for the production of lettuce,” said researcher and contributing author Ashley Kerna Bickel.

The study — which examined agricultural cash receipts for on-farm production and post-harvest activities in 2015 — was done at the school’s Department of Agricultural and Resource Economics.

“We examined the whole value chain, including on-farm and [activities like cutting, washing and packing] to understand the broad scope of the industry’s contribution,” Bickel said.

Between December 2014 and March 2015, according to Bickel, about 82 percent of the nation’s lettuce shipments came from Arizona.

From late November to mid-March, Arizona shipped about a billion pounds of lettuce per month. In most areas of the country, it’s too cold to grow lettuce in that timeframe, according to Bickel.

The study also found Yuma County ranked second among 429 U.S. counties for harvesting lettuce and spinach acreage, and leafy greens have accounted for an average of 17 percent of the state’s total agricultural receipts each year since 2010.

The only state that produces and sells more leafy greens than Arizona is California.

Read the story at KTAR. 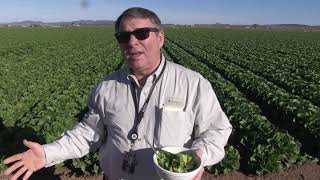 California and Arizona LGMAs recommend changes to the Metrics